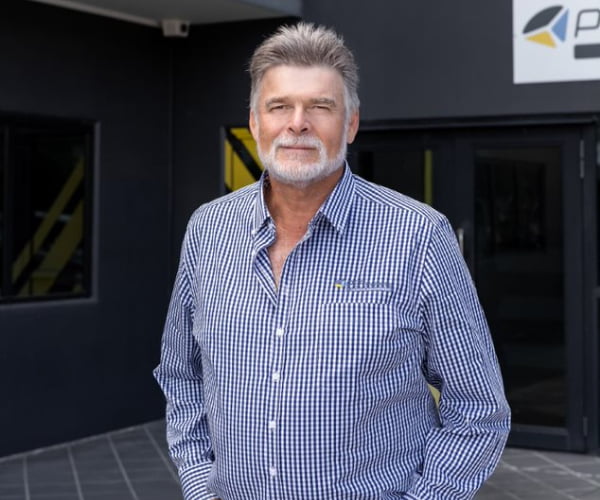 Ian Faber believes there’s no problem that can’t be solved. It’s just a question of breaking it down to the sum of its parts and finding the best possible solution. He has an infectious can-do attitude and an entrepreneurial spirit that have carried him well through his extensive engineering career – and they’re values he’s embedded into the company’s DNA as the founder and general manager of PSA Engineering.

“Our mantra has always been that nothing is too difficult for us. If it’s broken, we’ll fix it. And we will always find a way of doing something. And that’s stood us in good stead.”

Ian and his family emigrated from his native South Africa to Australia in the early 2000s. It didn’t take long for Ian to identify an opportunity in the booming Queensland oil and gas industry.

“I’d been here for two years when I decided there was a need in the market for a company that could do a lot in the oil and gas industry and in safety systems. That’s where the name PSA Engineering came from – process safety and automation engineering.”

Under Ian’s leadership, PSA Engineering grew organically in a very short space of time. In response to the needs of the market, the automation side of the business developed faster than the process safety side in those early days. Working in partnership with major operators, PSA Engineering became recognised as a technical leader in coal seam gas control systems. And with Ian as lead engineer, the company delivered the first end-to-end automation and safety systems for two of Queensland’s LNG Upstream operators.

“I’ve always wanted to create a company that is slightly different from your normal automation company. That was the reason we included process safety. We wanted to provide a unique service.”

For Ian, being in business is an ongoing process of review and reinvigoration. It’s an approach that’s worked exceptionally well for him over the years. He successfully ran his first company in South Africa for over 15 years before founding PSA Engineering over a decade ago.

“I’ve always had a philosophy that your company stagnates after five years. That’s when you need to change the direction of your business and take at least a 90 degree turn so that your competitors are left grounded.”

For PSA Engineering, the next turn is going back to the fundamentals of why Ian started the business and a major forever priority was delivering end-to-end functional safety services.

A prime example of PSA Engineering safety expertise is the exceptional work we’ve done for clients in the amusement park industry, where we’ve delivered best-practice safety standards and achieved the most stringent compliance levels for some of Australia’s leading operators.

Our capability to provide such total solutions to complex problems stems from Ian’s can-do attitude and his ability, like all great leaders, to surround himself with great people.

“I believe in people. I really think the business is about people. It’s not about me, it’s about the people who I have employed… At my age, I’ve realised that I have to change with the times; the younger generation is taking over and they have different way of operating, and I embrace that.”

The younger generation includes Ian’s son, Grant Faber, who joined the business as Commercial Manager. Ian is really enjoying seeing Grant and the new management team, including Jamie Parry and Mark Gracias, coming together to drive the business forward. Ian has seen the culture in the company flourishing, and it’s something that delivers him a great sense of pride.

“I’m really proud of the culture of the business. Being able to harmonise all these cultures together and have everybody work so well. We really are together as one as a company.”

We partner with you to deliver innovative, integrated and compliant engineering solutions. Meet the rest of the PSA Engineering team.